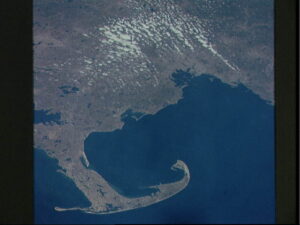 The view from space was incredible.  From 200 miles up, there was a completely new perspective.  To see the distinctive hook of Cape Cod or the blues and greens of the Great Barrier Reef as I sipped my morning coffee reminded me how lucky I was to be an Astronaut.  We had a wonderful teacher, Dr. Bill Muehlberger from the University of Texas in our early days of training.  He took us on field trips to show us what Earth looked like from ground level, then showed us pictures of what the same areas looked like from space.

Some things were disappointments from the lofty perspective of orbit.  Anyone who has seen the Grand Canyon from its rim can vouch for its grandeur.  From space, it is just an irregular crack in the brown surrounding landscape.  There are astounding pictures from low base camps looking up at snow-covered Mt. Everest.  Looking straight down on them from above, the Himalaya Mountains all look the same. The highest of them can’t be discerned.

But there are some interesting features that can only be seen mysteriously or not at all. 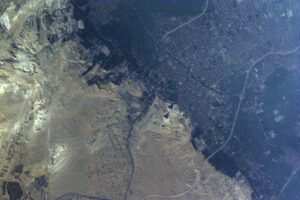 Often, I am asked if we could see the massive pyramids from outer space.  As all of you who have traveled to Egypt may well remember, the pyramids are about the same color as the surrounding desert; however, it is possible to view them from space at sunset.  Can you see their distinctive triangular shadows?

There is an urban myth that it is possible to see the Great Wall of China from the moon.  As far as my husband knows, that isn’t true.  He flew several of his five flights over that part of the world and was determined to photograph the wall.  Look as he might, neither he nor his crewmates could find it.

Astronauts know that the smallest things the naked eye can pick out from space are runways at large airports.  It is because, unlike most objects in nature, they are completely straight.  And they are a shade of gray that is different from the surrounding terrain. 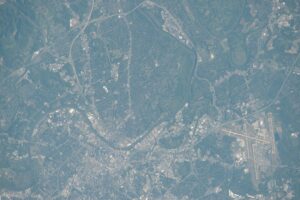 All astronauts want to take pictures of their hometowns, and I was no different.  On my three missions, I tried hard to time the photos just right.  I was always disappointed to see my photography after the flights.  Murfreesboro is mostly farm and forest, so the pictures were just greenery.  With better cameras and better photographers, my friends on the International Space Station clicked a photo of a nearby city.  Here’s one of the best close-ups of Nashville.  You can see the sinuous Cumberland River snaking through town.  The runways at the airport are impossible to miss, and if you look carefully, you’ll see the little white dot that is the Nissan Stadium.  All the pictures are “NASA photos” thanks to some great Astronaut photographers who wish their names were attached!