Home » Weekly Blog » Too Many Changes 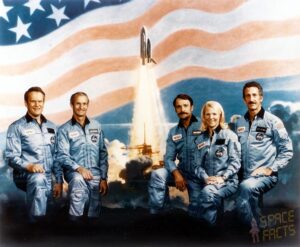 In the “olden days” when Space Shuttle flights were just beginning, as Astronauts were named to flights there were several things that had to be done.  An announcement was sent to the Public Affairs Office for release to the press.  Next a crew picture was taken and a patch designed.  The payload was assigned to the mission and the appropriate Space Shuttle chosen.  On occasion that careful planning went haywire. 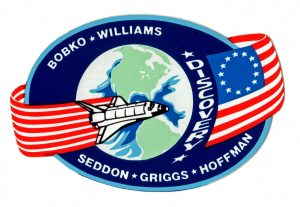 When I was assigned to fly in August of 1983 the flight was designated STS-41E, the 16th shuttle flight, on Discovery, to launch in August of 1984. Crew members were Bo Bobko, Don Williams, Dave Griggs, Jeff Hoffman, and me.  We posed for our picture and designed a patch with a 16-star American flag and the name of our Shuttle on it.  That would make me the third of the six women to fly (after Sally and Judy).  When the flight before ours had a “pad abort” (the main engines started up, a failure was detected before the booster ignited and the engines were shut down) everything from there forward got messed up. 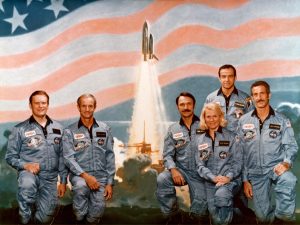 As NASA began to assess and correct the failure, our mission was postponed indefinitely and our crew was in limbo.  In the meantime, the whole Shuttle schedule was rearranged. Kathy Sullivan and Anna Fisher flew.  I would now be the 5th of the 6 women – and Anna would be the first US mother in space. It was a personal disappointment after all my preparation.

Eventually we were assigned to a different mission, on a different Shuttle — and with a different crew.  The 16 star flag remained on our patch but Challenger replaced Discovery.  A Frenchman, Patrick Baudry was added to the mission.  A second picture and patch were cobbled together. 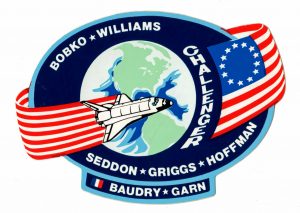 Then when that mission was scrapped, a politician, Senator Jake Garn from Utah replaced Baudry and we were back on Discovery.  New picture, new patch, new payload assigned with very little time to train for it.

As things bumbled along, a series of potential 7th crewmembers were considered.  One of them was Greg Jarvis who was put on STS-51L.  Unfortunately, that put him on the doomed Challenger flight.  Instead Charlie Walker was added to our flight because his experiment was already bolted into Discovery. Now the flight became STS-51D.  His name was put on our patch. 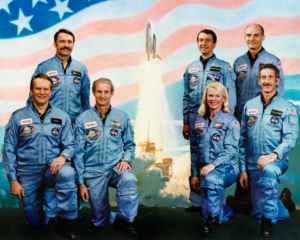 Eventually we got close enough to flight and had a picture, a patch, a crew, a payload and a Shuttle.  We launched on April 12, 1985 for a short 5-day flight.  When a satellite we deployed didn’t function we had to do an unplanned spacewalk, unplanned rendezvous and unplanned robot arm maneuvers to attempt to repair it.  That gave us a busy and exciting seven days in space. 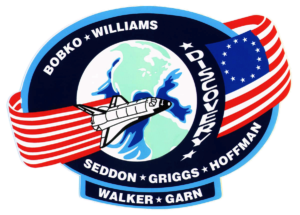 Later in the Shuttle program, things worked more smoothly and flights became more routine.  Never again would there be a crew with several crew pictures and several crew patches.  But just think: those are now highly collectable souvenirs of the craziness of the early Shuttle program!