My husband, Hoot, and I had many exciting moments in our Astronaut careers.  “Roll out” was always a thrilling time as we prepared for our flights.  Many steps, many people, many machines made that day possible.  Eventually, that special day would come when the enormous doors on the Vehicle Assembly Building, the VAB, at the Kennedy Space Center opened and our glorious Space Shuttle began its slow journey to the launch pad.

The most awesome thing about roll out was the “Crawler”.

In 1965, the Marion Power Shovel Company in Marion, Ohio was tasked with building a monstrous tracked vehicle that could carry space vehicles from their assembly point to their destination for launch.  The design was based on a strip-mining shovel which a NASA engineer had seen in action.  The “Crawler” as it was known, was designed with eight giant treads – like those on a tank – powered by huge diesel engines. 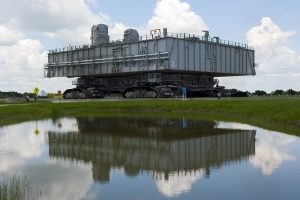 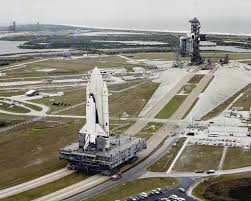 On exactly the right date, the six-million-pound Crawler slid under and picked up the gigantic launch platform and, carefully carrying the Space Shuttle like an enormous martini on a tray, began their journey.  With the combined weight of 11 million pounds the entire four-mile trip proceeded at a speed of 1 mile an hour.   It used 150 gallons of diesel fuel per mile or about 0.007 miles per gallon!  The Crawlerway, the path out to the pad, is covered with Tennessee and Alabama river rock which is pulverized to dust by the massive weight.

Just because our Shuttle had made its way to the launch pad didn’t necessarily mean we were going to launch soon.  There were numerous times when there was a “roll back” to the safety of the VAB due to  hurricanes, storms, and problems with the payload.  One time a woodpecker tore up the insulation on the large fuel tank. 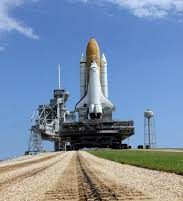 The two Crawlers are being modified to transport the new larger rockets for the Space Launch System which will send humans back to the moon – and maybe on to Mars.

In 2017 when modifications began, Crawler 1 had traveled 1960 miles and Crawler 2, 2207 miles.  Not bad for these 50-year-old workhorses!  The largest self-powered land vehicles in the world, the Marion Power Shovel Crawler-Transporters were added to the National Register of Historic Places on January 1, 2000.  All of us who flew on the vehicles they transported to the launch pad will always be immensely grateful!