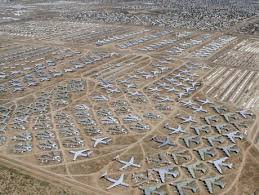 According to a legend, old elephants go to a mythical place to die – an elephant boneyard.  Do you know that there is another kind of “boneyard” on the desert sands in Arizona?

One day when Hoot and I were flying from Houston to the west coast he said, “Look at what’s on the ground below.”  As he dipped the left wing of our NASA jet, I looked down and was reminded of pictures I had seen of the English countryside just before the D-Day invasion.  There were thousands of planes arranged beautifully wingtip-to-wingtip on the desert floor below.  It was the largest collection of old airplanes of its kind at the Davis-Monthan Air Force Base in Tucson.

Because of the low humidity, meager rainfall, hard alkaline soil and high altitude, aircraft can be preserved for cannibalization for parts, refurbishment or preparation for display.  Visit the National Air and Space Museum in Washington, D.C. or any aviation museum across the country and you’ll see many of them proudly on exhibit. 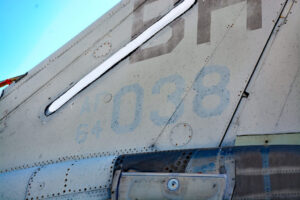 It is a rare former military pilot who doesn’t have a reverence for a place like this and see it with a tinge of heartache.  Our astronaut friend, Mike Mullane, went to see aircraft of the vintage he flew in Vietnam. With the help of a friend and some searching, he found the exact plane that had carried him into battle and safely home – identified by its faded tail number.  It was a tearful reunion – like seeing an old friend.

Because of NASA’s changing programs – from rockets to Space Shuttles – space-related aircraft are also stored there and sometimes refurbished – or you might say “resurrected” – years after they were moth-balled in the desert.  The “NASA Super Guppy” was one of them.  Cobbled together from spare parts of older versions, its huge cargo-carrying capacity made its rebirth invaluable when transporting parts for the International Space Station. 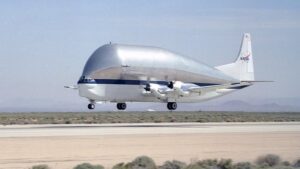 Some used airplanes met rather sad but useful sacrificial ends.  When new versions of the awesome F-16 fighter jet became available, older ones were converted into supersonic unmanned “drones” that could be flown remotely from the ground.  These drones were used for target practice by young fighter pilots in training.   Some unusable planes are disassembled and sit sadly in jumbled piles waiting to be melted down and perhaps used in aircraft of the future.

The boneyard is the Arlington National Cemetery for airplanes.  There are no gravestones but it is a reminder of wars past, victories won, friends remembered and friends lost.  Should you be flying over the vast desert of Arizona and look down to see the immense boneyard of airplanes, send them a salute and thank them for their service.