Storms are a reminder of the majesty and fearsomeness of nature. 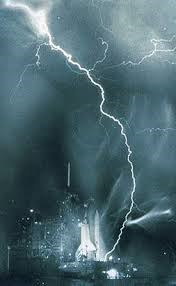 Like many small children, I was afraid of thunder. I’d cling to my parents, screaming when lightning started. One morning before dawn a storm came up, and I ran crying to my parents’ bed. My father was tired of the fussing, so he scooped me up and took me out to our covered back porch. There we sat as the lightning flashed and the thunder boomed. After a while my terror subsided as I sat safe in Daddy’s arms. Never again did storms frighten me.

Of the wondrous things we saw in space, thunder storms were some of the most unusual and remarkable. On the Earth, we have become accustomed to seeing a flash of lightning then some time later hearing the sound of rumbling thunder. In fact, my husband has taught me that if I see the light, then count the seconds until I hear the rumble, I can tell how far away the storm is since light travels faster than sound. Five seconds equals one mile. 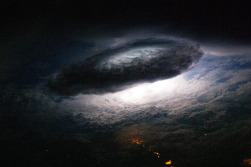 From space, the experience is different. I could see not a single flash but light that flowed like a river through many miles of clouds. Over and over, brightness streamed across wide swaths of the landscape. It was a light show rolling through the darkness below. But it was a silent display of nature’s fury. The sound didn’t make it up to our spaceship two hundred miles above.

The fascination of our tiny blue marble of Earth hurtling through space was never ending. There were green circles of irrigated land in the desert, whole countries under the smoke of fields being burned to clear the land in the spring, vast snowcapped mountain ranges, the serpentine Mississippi and Amazon Rivers, red plankton blooms in the oceans, typhoons whirling in the Pacific. 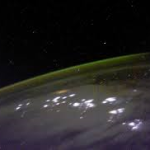 Speeding across the America in nine minutes, I saw the bays of the western—then eastern—coast, where our forefathers dropped anchor to explore a new world.

We left many nose prints on the windows of the Space Shuttle as we took in the remarkable view of this world just as new to us.