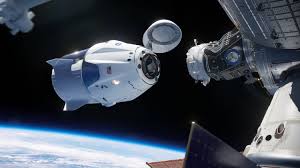 Many around the world watched the Space X Falcon 9 rocket and Crew Dragon module launch from Cape Canaveral, Florida, carrying Bob Benkyn and Doug Hurley into space. The crew module went on to unite with the International Space Station. The approach and docking were fully automated and worked flawlessly. I remember the days when the mating of huge objects in space was much more complicated – and fraught with peril.

Exactly how can you join together two space vehicles whirling around the Earth at over 17,000 miles per hour? Or why would you need to? When NASA set the audacious goal of putting a man on the moon, the plan included joining components in space. Was that possible? Was it dangerous?

A space rendezvous was first attempted in 1965 on Gemini 4 when Jim McDivitt got close to his spent booster but was stymied because of something called “orbital mechanics”. In orbit, if you are behind your target and you try to go faster to catch up, you raise the altitude of your ship so that you are now above the target. Got that? Well suffice it to say, it’s complicated.

The first actual docking in orbit was flown by Neil Armstrong in 1966 on Gemini 8.

Docking was critical for the Apollo 11 mission of landing humans on the moon. The Apollo rockets launched with the most important components, the command and service module (CSM)and the lunar module (LM), in the nose of the mighty Saturn V rocket. Then the CSM and LM separated from the spent booster rocket. The CSM went into moon orbit and the LM landed on the moon’s surface.

Neil Armstrong and Buzz Aldrin stepped down onto the moon’s surface and spent two hours exploring and collecting moon rock samples. A safe return home for these two explorers depended on the ascent stage of the LM flying up and docking with the CSM for the return to Earth. All went as planned and history was made. 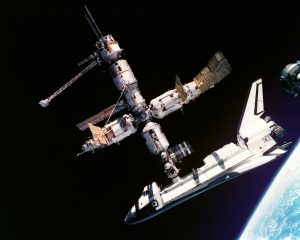 Another remarkable joining of spacecraft took place on STS 71 in 1995. My husband, Hoot Gibson, had the daunting task of joining the Space Shuttle Atlantis with the orbiting Russian Space Station Mir. A 250,000 pound vehicle would attach itself to a 250,000 pound station orbiting the earth at 17,500 mph. Flown entirely manually, Hoot carefully nudged Atlantis at 0.1 feet per second up to the Mir. It was the first time a Shuttle had performed such a link up. For a few days, the conjoined vehicles became the largest spacecraft in orbit 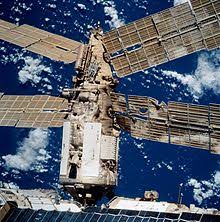 Close encounters like these didn’t always go well. One rendezvous that went wrong might have ended the lives of the crew. In 1997 an unmanned Russian Progress supply ship collided with the Mir space station. It broke a hole in the hull of the SPEKTR module causing a depressurization of the station. Luckily the crew was able to close the bulkhead to the module which saved the crew from certain death.

What will the future of linking components in space look like? I can’t wait to see!