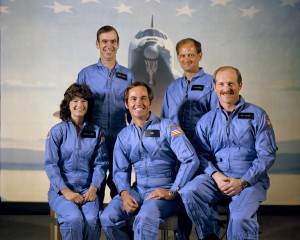 What would you choose to pack in your suitcase for a trip to space? If you look at the pictures of Astronauts in formal crew pictures or in flight, you’ll notice evolution going on.

In the beginning of the Shuttle program, the brave souls who were crazy enough to fly on this untested vehicle (the first that flew unmanned for its first flight) wore pressure suits like high altitude pilots (with parachute attached), so they could use the ejection seats. 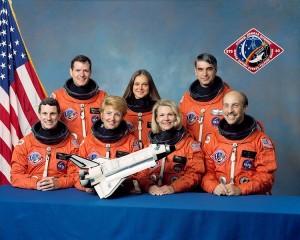 As crews got larger than two, the ejection seats were removed, and crew members evolved to a “shirt sleeve environment.” Well it wasn’t exactly that. We were issued fire-proof flight suits like we wore in the NASA jets that were “Columbia Blue.” While certainly more comfortable, we had no parachutes and could only escape when the shuttle was on the ground. You’ll see those in the crew pictures before January 1986.

With the Challenger accident, there was some thought that the crew might have been able to bail out with the proper equipment. When the capability to exit the Orbiter at certain phases of the flight, back to the pressure suits we went. Have a look at a post-Challenger crew. The suits were heavy, bulky, uncomfortable, and unbecoming.

At first, the crew equipment engineers (not exactly slaves to fashion) chose utilitarian wear. Shorts, long pants, and a jacket made of fire-retardant Columbia blue in various sizes were crafted. A fashionista must have decided that a navy blue polo shirt would go well with these. For a bit of “flair,” the crew patch could be sewn onto the shirt. Being cost conscious, these clothes could be recycled for the next crew. The patches would be removed, the shirts washed, and the Columbia blue garb dry cleaned to keep them fire retardant. Of course there was a large NASA contract to keep all the clothes inventoried and available. 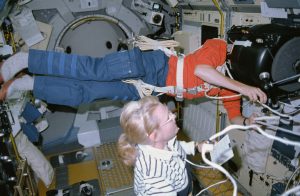 A Little Variety in Crew Shirts.

With the flight delays after Challenger, there was a bit of rebellion about everyone looking just the same in space. Could it have been that there were more women on flight crews? Or maybe we remembered that the space travelers in Star Trek and Lost in Space wore more colorful, futuristic attire? When the cost of “recycling” and inventorying clothes was found to be high, a few brave people figured there must be a better, cheaper way. Flame-resistant shorts, pants, and jackets—all washable—avoided the cost of dry cleaning. Crew members could have shirts purchased for them from commercial vendors in whatever color and style they wanted and could keep them after the flight. 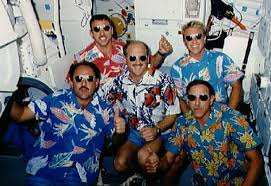 Naturally, the ever-fun-loving astronauts sometimes “pushed the envelope” until the rules were made clear.