Max Q – the All Astronaut Band 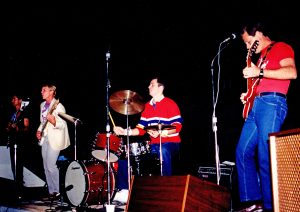 Max Q at the Sock Hop

The year after the Challenger accident in 1986 was a difficult, busy, and sad one for NASA’s Astronaut Corps.

What could we do for fun?  Why not a Sock Hop?  For those who don’t remember the 1950s, high school dances were often held in the school gymnasium. Dancers had to remove their shoes, so they wouldn’t scratch the hardwood floor.  Everyone in the astronaut office was told to plan skits and wear the poodle skirts and bobby socks that were the fashion of the era. 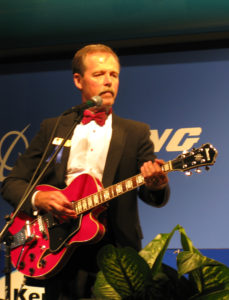 Four astronauts decided they would form a band.

Brewster Shaw was on rhythm guitar. My husband, Hoot Gibson, played lead guitar. Pinky Nelson was base guitar, and Jim Weatherbee was the drummer.

Brewster and Hoot were the singers.

They had to come up with a clever name, settling on max Q—a rocketry term.

It is a product of the velocity of a rocket and the air density; it defines the outside pressure on the rocket at any point.  As a rocket climbs from the dense air near the ground and picks up speed, Q will increase. As it climbs higher, the speed will increase, but the air density will go down…along with the Q.  So, as a rocket launches from planet Earth, Q will increase to a maximum before decreasing again. That maximum, when the highest structural load is on the vehicle, is called max Q.  (For the Shuttle, max Q occurred at about 35,000 feet altitude.)  Hoot said to the group, “This crazy band will create lots of noise and plenty of air pressure…but no music.  That’s us!” 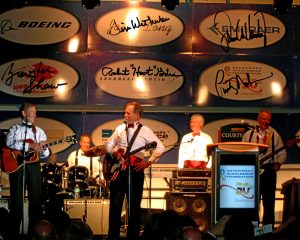 The party was just the thing to bring us out of the doldrums.  Sonny Carter was the best DJ ever, and Bill Shepherd and Pierre Thuot were perfect as the Blues Brothers.  It brought us back together with friends and looking forward to happier days in our future.

An all-astronaut band was unique, and it was soon asked to play at fajita festivals, chili cook-offs, weddings and, New Year’s Eve parties at fancy hotels in downtown Houston.  Steve Hawley came on board as a keyboard player.  Then, they were asked to appear on Good Morning America.  Hoot was able to borrow Gibson guitars for all the guitar players for this, their first national event.  All the astronauts tuned in, and all our children finally thought their dads were cool.  The band members even sold shirts with “Max Q World Tour” on them.

They had made the big time. 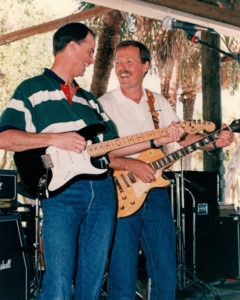 As some of the original Max Q left NASA, others were recruited to take their place.  As something of an inside joke, NASA’s Astronaut Selection Board would ask during the interview of applicants if they played a musical instrument.  There always seemed to be new talent coming along.

In 2009, the original five band members were invited to play at the Astronaut Hall of Fame Ceremony in Cape Canaveral, Florida.  As they played more than two decades after the Sock Hop, they and their audience were young again.