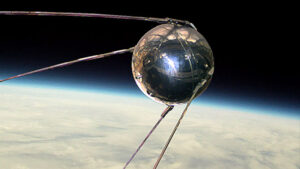 The Russians were coming!

It was 1957, and their Sputnik satellite was orbiting the Earth.  Would they attack us from space?  We were scared. The Space Race…it was on. Could I ever be a part of it?

In April 1961, the Russian Yuri Gagarin orbited above us.

In May of that year, President John Kennedy set the audacious goal for the United States to land a man on the moon and return him safely to Earth by the end of the decade – which most of us thought would never be possible, but what an exciting challenge it was!

From its outset, it looked like the ‘60s were going to be a different decade from the idyllic 1950’s.  America seemed to be coming apart at the seams.

President Kennedy was assassinated in November of 1963 and his brother and Martin Luther King met the same fate later in the decade. 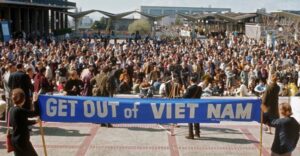 There were Vietnam War protests, the Civil Rights Movement, the fight for Women’s Liberation, and student unrest on college campuses.  The Counterculture movement was underway with changes in music, clothing, drugs, sexuality, and family life.  The mantra became “turn on, tune in, and drop out.”

What was the world coming to?

Running in what seemed like a parallel universe was our nation’s space program.  From Alan Shepherd’s short suborbital flight in 1961, through the Mercury, Gemini and early Apollo flights there was a race against the Russians to get to the moon.  The goals, people and work could not have been more different from what was going on elsewhere.  The new National Aeronautics and Space Administration’s engineers in white, short-sleeved shirts with pocket protectors began designing audacious, ever-advancing, ever-enlarging rockets – and brave Astronauts were willing to strap into them for more and more exciting flights to space.  Americans were glued to their grainy TV sets for every launch.

Then American men began to put footprints on the moon fifty years ago this month, starting with Apollo 11 on July 20, 1969 with the whole world watching. By the end of the crazy 1960’s, the United States had the feeling of limitless possibilities ahead. If we could land men on the moon, we could do anything. 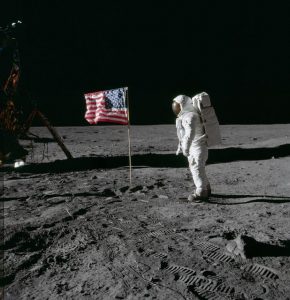 How strange it was that in 1978, just nine years after the first moon landing, my early dream while watching Sputnik came true, and I became a member of the Astronaut Corps.  Me, working alongside men who had been to the moon?!  Heroes like Alan Shepherd, Neil Armstrong and others came to tell our new Astronaut class what their flights had been like, often revealing little-known facts and divulging their amazing personal stories.  Alan Bean from Apollo 12 and John Young from Apollo 16 were leaders in our office.

My generation was inspired to be part of grand endeavors like the space program.  We felt like nothing was impossible.  We were winners!