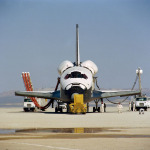 Shuttle on the Runway

On April 12, 1981, I stood near a swamp in Florida with a Search and Rescue team, in case we were needed. We watched the Space Shuttle Columbia, a butterfly bolted to a bullet, roar above the trees and into the sky on its first flight. The magnificence of the moment cannot be described. We cheered, we cried, and we felt so lucky to be present at the birth of the Space Shuttle era.

On June 5, 1991, I launched aboard that same vehicle on my second trip to space on a life sciences mission to study human adaptation to weightlessness. Columbia, strong and sturdy, was the best Shuttle to carry the Spacelab canister in the cargo bay. The landing was at Edwards Air Force Base in California. Several days later I went to see the vehicle as it was loaded onto the back of the NASA 747 to be flown back to Florida for refurbishment. 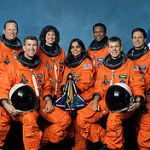 I was able to climb up to within arm’s length of the ship, which was enrobed in scaffolding. Rounding the front, I found myself looking directly into the cockpit windows. I gasped as all of a sudden it felt as if I was looking into the face of something alive. Here she was: a little dinged up and worn in a few places, but she was a grand lady ready to charge into space again. Always a faithful servant, she would carry me to space again on my third and final mission. I spent a total of 23 days wrapped in her embrace.

On January 16, 2003, having left NASA several years before, I was serving on a committee of the Institute of Medicine studying astronaut health. The committee members had asked if they could hold a meeting at the Kennedy Space Center and view a launch. Amazingly, I remembered it was the 25th anniversary of my selection to the Astronaut Corps. Here I was watching my old friend Columbia, entrusted with another precious cargo, rise once again.

On February 1, I turned on the television in time to watch the end of the mission. When the announcer said she was late for her landing, I knew. There was no way a Shuttle could be late for landing. She was gone.

Tears running down my face, I remembered that I had seen her first launch, and I had seen her last launch. She had taken me to space twice and brought me safely home.