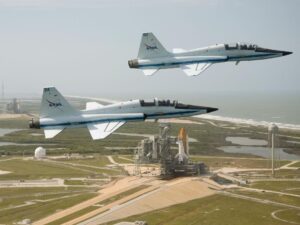 Flying by the launch pad.

When a gaggle of airplanes fly overhead, you can be certain that it means a special event.  I’ve witnessed a bunch of these flyovers, some exhilarating, some sorrowful and some proud.  I’ve spotlighted several of them in this story.

When astronauts finished their training for a flight, they’d fly the NASA jets to Cape Canaveral and swoop around the launch pad where their Shuttle stood.  It was a sign to all the workers who came out to watch that “We are here and ready to fly.”  It was an incredibly exciting moment for all of us!

When my husband, Hoot, returned to Houston after completing his STS-61C flight, he and his crew were welcomed back home at a gathering of family, friends, astronauts, their training team and many others at Ellington Field where the NASA jets were kept.  It didn’t occur to him that some of his flying buddies from the little private airport where he kept his small racing plane were not in attendance. 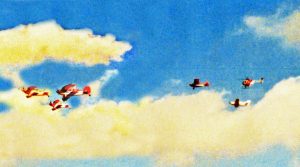 Suddenly, there was a buzz of airplanes overhead.  The crowd looked skyward to see a ragtag bunch of nine planes in sharp formation scooting proudly above the runway.  Hoot was overwhelmed that so many of these aviation friends had gotten together to make it an even more unforgettable day. 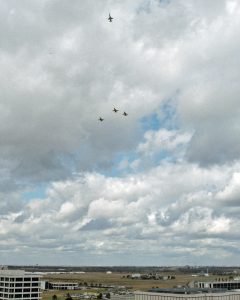 Another flyover from many years ago is carved on my heart.  In January of 1986 we lost dear friends in the Challenger accident.  Soon after that day, President Reagan came to address a memorial service at the Johnson Space Center.  All of the Center’s personnel and the Challenger families formed a large crowd near the peaceful pond in the midst of all the buildings.  As the President finished his wonderful remarks, from behind where he stood there was a roar of four NASA jets zooming overhead.  In the classic military manner, one of the jets swept upward in the Missing Man formation.  There was not a dry eye in the crowd. 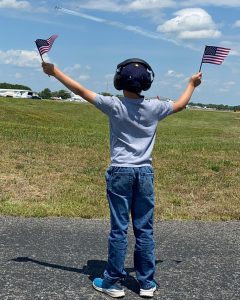 Andrew and the Blue Angels.

A happier memory took place recently.  This year the Navy’s Blue Angels flight team has been performing flyovers of many of our nation’s cities as part of “Operation America Strong”, a salute to the wonderful healthcare workers and first responders during the COVID-19 pandemic.  When we found out they would fly over our hometown, we gathered up our family, including our seven-year-old grandson and went to a spot where we could see the jets pass over.  As we anxiously waited, we spotted in the distance the six jets in a perfect tight formation which thrilled everyone nearby.  Flags waved, shouts of “Go Navy” rang out and all of us were proud to be Americans – especially grandson, Andrew.