In this holiday season, we all remember Christmases past—the best present ever received or the most perfect gift ever given. In 1968, a miracle happened that made it my most memorable.

In 1968, President John F. Kennedy’s goal of landing a man on the moon by the end of the decade and returning him home safely seemed unachievable. The U.S. space program was recovering from that terrible 1967 Apollo 1 fire which had taken the lives of three astronauts on the launch pad. In October of 1968, the second flight of the program, Apollo 7, had circled the Earth and tried out some of the moon landing equipment. A lunar flight seemed far, far away. 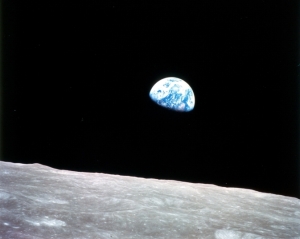 On the day before Christmas, Apollo 8 sped into lunar orbit. As the spacecraft passed around the gray, rocky landscape, there…above the moon’s barren horizon…was our home planet lit by the sun. For the first time in our existence, we humans were awestruck by Earthrise, seeing that tiny blue marble in the vast blackness of space. Those astronauts were three men in a cramped little capsule with the rest of mankind on that distant speck in the sky.

Then three voices came to us from farther away than any other humans had ever journeyed, strong and clear, as they read from the Book of Genesis:

Bill Anders: “In the beginning God created the heaven and the earth. And the earth was without form, and void; and darkness was upon the face of the deep. And the Spirit of God moved upon the face of the waters. And God said, Let there be light: and there was light. And God saw the light, that it was good: and God divided the light from the darkness.”

Frank Borman: “And God said, Let the waters under the heaven be gathered together unto one place, and let the dry land appear: and it was so. And God called the dry land Earth; and the gathering together of the waters called the Seas: and God saw that it was good.

And from the crew of Apollo 8, we close, with good night… and God bless all of you, all of you on the good Earth.”