Can I Do This? 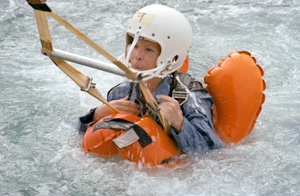 There I was, hanging under a parachute over Florida’s Biscayne Bay having just been flung off the back of a flat top boat like a parasailer.  Soon I would be floating down to the bay only to be dragged along on my belly through the water until I could manage to disconnect from the chute.  I was about a month into my training and already I had to prove myself at a water survival course.  There followed many other tasks—both mental and physical—that at first I thought were designed to see if I was willing to do things I had never dreamed I would (or could) do.

Were they trying to discourage me or show that I wasn’t tough enough or smart enough to be an astronaut?  At first I wasn’t sure. Dutifully, I worked my way through jet flying, SCUBA training, and rocket science…not to mention figuring out how to work with equipment made for taller, stronger people.  Were these things tests, I wondered?  With time, it became clear that I wasn’t being tested: I was being trained.

I had to participate in parachute training because I was to fly in NASA’s jets to learn how to be a good flight crew member, and I might have to eject someday over water. I had to take 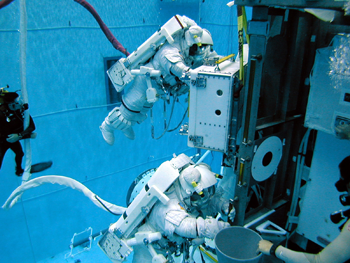 SCUBA because most of the training for spacewalks took place in a huge water tank, and if my spacesuit flooded, there would be SCUBA divers to rescue me.  I had to learn the science of rockets and the things they carried because I might have to repair that hardware in space.  I learned to make do with pieces of equipment that weren’t sized for me because if I couldn’t work with them, then there were jobs I wouldn’t be qualified to do.

It became clear that the training was tough because NASA had not only selected me to be an astronaut but also was committed to making sure I was successful at the job.  With the completion of each difficult task, I gained the confidence to know I could accomplish the next.  My new mantra became, “I can do this!”