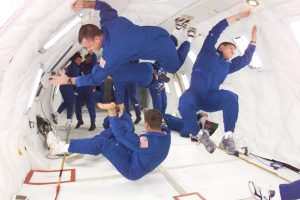 Throwing up is never pleasant.  Imagine what it would be like in weightlessness.

Two thirds of space travelers have some form of motion sickness, ranging from dizziness to nausea to vomiting.  It might have been present in the early days of spaceflight, but it became more apparent with the Space Shuttle. From sitting on the launch pad to being weightless took eight and a half minutes.  Unlike astronauts who flew in cramped capsules, Shuttle crew members could unstrap immediately, float around, and soon fly headfirst downstairs to the living quarters.

Could motion sickness be predicted in certain people?  Would a person adapt to it on his or her first flight and never have it again?  If being prone to having it couldn’t be foretold, could it be prevented— or treated when it occurred in space?  Most important, how do you keep the stuff that’s regurgitated from flying all over the cabin and grossing out other crew members…and making them sick?

This last issue was easy for the engineers. 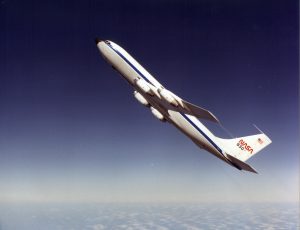 Several prototype space barf bags were developed.  The one that made it into production was one that was held snugly to the face and could be closed quickly to keep the floating debris from slipping out.  It even had a little cloth towel attached that allowed the victim to wipe his or her face.

Scientists began to recruit subjects from the general population to test each person’s likeliness to have the problem.  They used various torture devices: spinning chairs, simulators that rotated the subject head over heels, eye goggles that reversed vision of everything, and flights in an airplane (aptly dubbed the Vomit Comet) that went up and down like a roller coaster.  Lots of those folks got sick.  The astronauts said regular people just didn’t have the Right Stuff; therefore, real astronauts were recruited for the studies.  (Yuck.)

Some of us were susceptible and others were not, but when we were in orbit, there was no correlation between those who got motion sick quickly with ground testing and those who got sick in space. 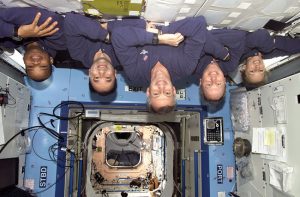 Do YOU find this disorienting?

Can you train a person not to get sick if he or she is prone to it?  More whirling around or floating up and down before and after biofeedback or other training.  (More yuck.)  It seemed to help on Earth, but it didn’t work when the astronaut got to space.

Finally, a medication was found that could be given inflight at the first onset of nausea, and it worked!  But the scientists wanted to understand the root cause of space motion sickness and study the medication for side effects.  None of the astronauts would volunteer for the proposed studies.  The problem had been solved as far as crew members were concerned.

We’d love to add you to our email list. If you have not yet signed up, please do so by clicking here.