Launch day was always exciting when I was about to board the Space Shuttle. There was a different kind of excitement when I was the “supporting spouse.”

Hoot and I had a lot of experience doing both of these things. He flew before me in 1983, and I played the supporting role. Our firstborn son—and the world’s very first Astrotot—Paul was only 18 months old and a handful! He was learning to walk and wanted to toddle everywhere. In the early days of the Shuttle, families had to find their own way to Cape Canaveral for launches. This would be Paul’s first airplane ride and my first time to travel with a toddler.

Before daylight on launch morning, the families were taken to the Launch Control Center (LCC). Waiting in the Launch Director’s office and plied with soft drinks and doughnuts, all the children were on sugar highs. As the sun rose, the countdown proceeded until T minus 9 minutes. Shepherded up to the viewing area on the roof, we saw the spectacular vehicle, ready to go, in the distance.

As the countdown clock reached T-6 seconds, we could see the smoke from the main engines billowing beneath the Shuttle; seconds later, the solid rockets fired. The Shuttle seemed to leap off the pad. It took several seconds for the vibrating roar from the lift-off to rattle our bones.

What joy it was to see them on their way!

When it was my turn to fly in 1985, the tables were turned. I worried about how Hoot would fare with Paul, who was three at the time. Later, I asked one of our fellow astronauts how Hoot had held up.

“Oh, we saw him on the beach with little Paul. He said he was using Paul for trolling bait.” (I should have known a handsome man with a little child would attract nice ladies on the beach!) 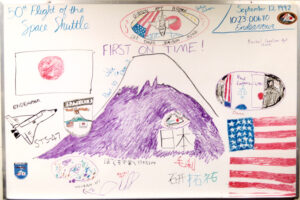 When I had three children in tow—Julie, Paul, and Dann—the children were old enough to decorate a whiteboard about the flight. Every crew’s boards were displayed in a large NASA building to show their children’s artistic skills. 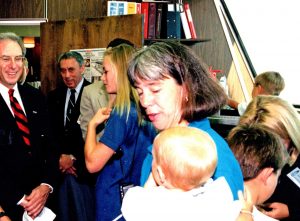 See the hand reaching out?

Sometimes VIPs came to the launch and visited the families while we waited in the Launch Director’s office. For Hoot’s fourth mission in 1992, Vice President Dan Quayle came to see us. I had been watching young Dann, age 3, who was fascinated by a huge Lego® design of the launch complex on a corner table. As I held my hand out to the Vice President, I could see Dann in the background standing up in a chair and reaching out to touch the vast spread of Legos. Down with a crash it came! I hoped someone could reconstruct it. 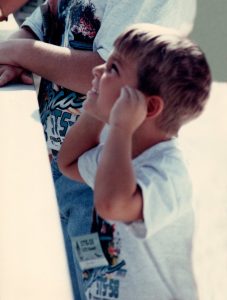 Listening to the roar at lift-off 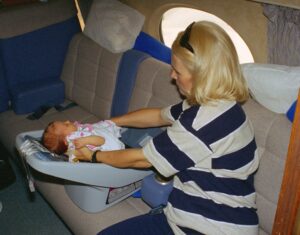 Dann redeemed himself a year later by behaving, fingers in his ears, on the rooftop awaiting my last launch.

Hoot’s last flight brought my biggest challenge. Our youngest, Emilee, was born on June 9, 1995, and Hoot’s last flight was on June 27. Luckily, she was a good baby and slept through the whole thing. Spouses and children will always remember those days of waiting—together—for those special moments in space history.

We’d love to add you to our email list.