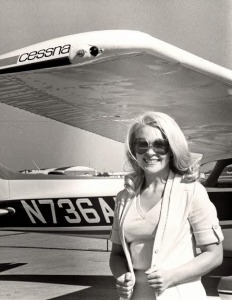 “I own a flight school.”

Those words spoken in 1973 by a plastic surgeon across an operating table in my last semester of medical school were the beginning of my aviation career. When I said I had always hoped to take flying lessons, he invited me for a test flight that weekend at the Memphis airport.

Getting into the air and leaving all the sick people behind was exhilarating: I was hooked.

My father gave me flying lessons as a graduation present. During my surgery residency I earned my private pilot’s license and put about a hundred hours of flight time in my log book.

During my interview with NASA’s Astronaut Program in 1977, I think they were more impressed that I was an aviator (or aviatrix as the early women pilots were called) than with my medical background and surgical training.   It may have been the reason I was selected over non-flyers as well qualified.

Arriving at NASA in 1978, our earliest training revolved around learning to fly in the T-38 jets. It was an important test of whether we would fit into this flying organization. Unlike the non-pilot astronauts before us, we would not go to the Air Force for jet training but would be taught by fellow pilot astronauts. Men who had fought in wars and survived test pilot school—even some who had walked on the moon—these aviation superstars became our instructors.

Flying in the back seat of jets was both scary and exciting.

Learning how to deal with emergencies certainly focused our minds: having to eject from the plane and survive in the water, what if an engine failed in flight, and what to do if the pilot was hit by a bird coming through the windshield. I became a good navigator and learned the unique language of aviation communication. Soon, the pilots would let me do as much of the flying as I desired—except the take-offs and landings, which by our rules always had to be done by the pilot in the front. 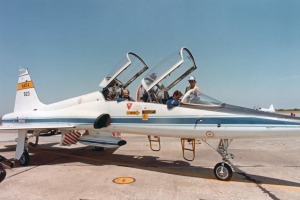 Ready to take to the air with Hoot.

We used the jets for travel and training. NASA facilities and the contractors building the Shuttle were scattered all over the country. It was easier to hop in a jet and fly to a military base than to fly commercially. The pilots practiced Space Shuttle approaches at our primary landing sites in Florida and California, as well as at the back-up site in New Mexico. While not exactly glamorous in my baggy flight suit and combat boots, I was an unusual spectacle climbing out of the plane. Ground crews were taken aback when I opened the canopy, pulled off my helmet, and a cascade of blonde hair spilled out.

The pilot I most liked to fly with was the youngest one in our astronaut class. He had flown in the Vietnam War, attended the elite Navy Fighter Weapons School, or Top Gun, and was first in his class at the Navy Test Pilot School. He was kind, patient, and enjoyed talking during the quiet times during the flights. People often find it strange that I fell in love with my future husband from the rear seat of a jet, looking at the back of his helmet, hearing his voice over the intercom. Yes, it could happen –and did.