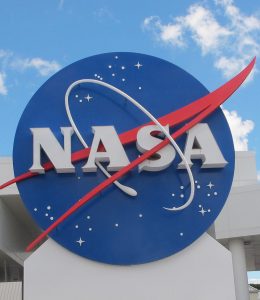 This blog originally appeared in 2015 and has been brought back and updated by Dr. Seddon. We hope you will enjoy this revised version of a past fan-favorite.

I am often asked what Astronauts are really like. All are very bright (some are brilliant), friendly, hard-working, reliable, and productive. These modern-day heroes became my friends in the Shuttle’s heyday. I also had the opportunity to serve twice on Selection Boards for new Astronauts. We liked to say we were looking for high-performing, low-maintenance people.

A key character trait we all appreciated was humor. Astronauts were the most fun-loving people I have ever known. There was a constant back-and-forth banter between fighter pilots and attack pilots, between the Air Force guys and the Navy ones (“Anybody can land on a stable, seven-thousand-foot runway. Only a Navy pilot can land on a pitching aircraft carrier deck.”) And, oh my, the few Marines were often the punchline of the jokes!

The scientists in the group were not left out. On one of his flights, my husband and his co-pilot were required to point a Shuttle cargo bay telescope at specific regions of the sky. 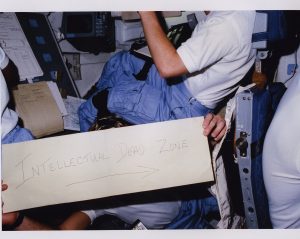 The two astronomers on board retaliated by taping a sign to the back of the forward seats that read, “Intellectual Dead Zone.” 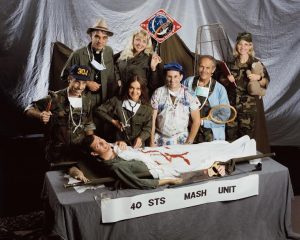 Funny crew patches were also mostly confined to private files. The Chief of Crew Operations had to approve all patches. Once, he jokingly told a Commander that there had never been a dragon on a patch and to add one. The design that came back with Columbia as a fire-breathing dragon destroying a Russian space vehicle, which was not deemed unacceptable. Cleverly, to comply with the order, the crew arranged the stars on the patch in the shape of the constellation, Draco (the dragon). 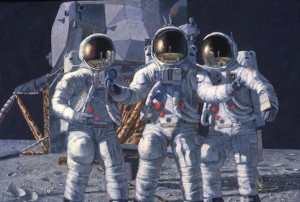 My favorite space picture is a painting by the famous Astronaut artist, Alan Bean, who walked on the moon and who paints fantastic moonscapes. He shows his Apollo 12 crew on the lunar surface. There are two funny things in the picture. Do you see the two fingers forming horns above the central figure’s helmet? Look again. There were never more than two men on the moon at a time. The Command Module pilot always remained in lunar orbit, but Alan has pretended he walked on the moon with them.

All these friends of mine are unassuming heroes. I’m sure they feel as I do: we were given extraordinary opportunities to do incredible things for which we should give back.

While I am honored to have been inducted into the Astronaut Hall of Fame, I am particularly happy to be a part of the Astronaut Scholarship Foundation that funds young college students, allowing them to become tomorrow’s heroes.—Rhea

To receive Rhea’s blog to your inbox, simply sign up here, and we will see you next month!